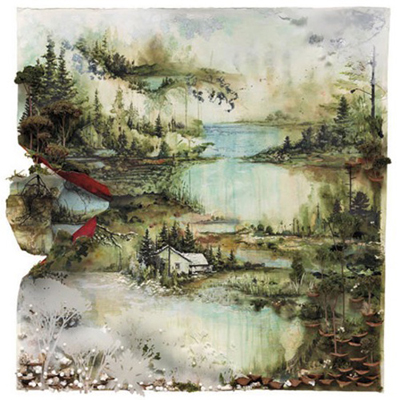 Bon Iver opens with a single guitar line backed by what sounds like wooden wind chimes. This guitar line is a gentle affair that seems to focus on the past, but once brought back in the chorus of the opening track ‘Perth’ it becomes a powerful monster bringing those thoughts of the past front and centre. As the track progresses we get a wealth of instruments which build on each other. Saxophones and a brass section add strength without being bombastic and in its conclusion we’re left with a kick drum you could expect to hear from a metal album. This opening puts the album’s cards on the table, you’re not going to hear a usual folk album, it’s going to try something new and you’re along for the ride. Thankfully it’s a ride you will want to be on.

This album’s influences come from all over, we get to hear elements of Avant Garde and even experimental jazz but these are reigned in by a base of traditional songs and believable vocals that focus on thoughts of the past with an eye to the future. Justin Vernon’s lyrics don’t wallow in regret like his previous work, but feel like they’re learning from their mistakes and moving on, giving the album a compelling bittersweet feel.

The production also follows alternative methods, away from traditional folk music. EQ is regularly used as an effect something more akin to dance music and little samples are dotted throughout the tracks that feel like Easter eggs for repeat listens. These inserted samples vary from guitar and drum fills to soundscapes and add an extra layer of subtle texture to the album.

What is really astounding is that it works. The album seems to do so much that in lesser hands you would expect it to feel like a bundle of opposing ideas. However the reason it succeeds is focus, each track may feature a wealth of ideas from loads of different genre but there is still restraint. The elements are there purely to compliment the song and its vocals, rather than divert your attention away from them.

We’re left with an album that’s vastly complex but also instantly catchy. Something for dedicated muso’s and casual listeners to enjoy equally. This album is an enigma and something that I will treasure for years to come.