The new Run The Jewels album RTJ 3 feels like a story of two halves. It opens with the usual all out furore that we expect from their previous two albums. But on its second half we get a new side to the group. One that features a different take on the production and lyrics. Tracks that feel more like well planned attacks that the instinctive raw anger we get from their previous work on the first half of this record.

The final tracks “A Report to the Shareholders/Kill Your Masters” are mixed together and provide a perfect example of this new direction. The music still has the heavy production El-P is known for but its more stripped back, with the percussion mixed into the instrumentation so it isn’t the harsh force it usually is. Together they provide a mournful bed for the delivery on the vocals which deal with the fears both Rappers have for the future due to recent events.

It’s this contemplative and weighted approach that really adds something new to their commentary on society. In the past, Run The Jewels have always sounded like a prize fighter in the first round. The energy is flowing and the punches are landing with style and flair. A Report to the Shareholders/Kill Your Masters shows a group who have been through one too many fights. With more experience and influence but feeling weaker than ever, beaten but not defeated. It’s a reflection of the artists feelings themselves and also a reflection of our society at large and its worth your time: 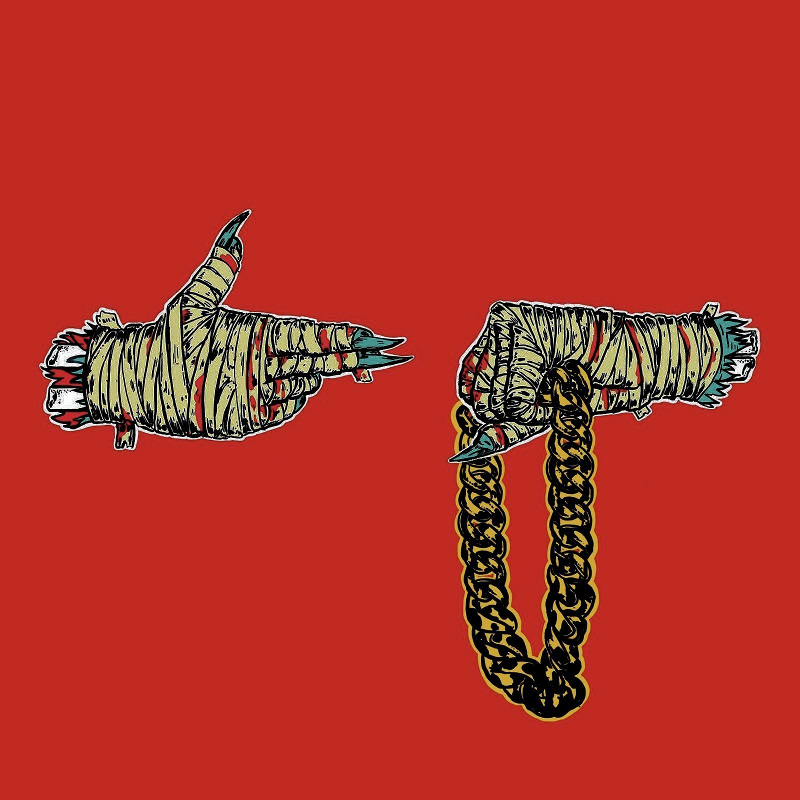 Before I start. If you have a slight interest in Hip Hop, you haven’t heard Run The Jewels and you have an email address and access to the internet you can download this album for free from their website http://www.runthejewels.net/ and if you like it buy it you have no excuse!

For those who already have heard it or need more persuading ill continue.

RTJ2 continues the sound and extreme views of rappers Killer Mike and El-P found on RTJ1. Heavy Beats, harsh synths and hard sampling underpins often angry lyrics about Sex, Drugs and Violence but with a rapier wit and strong agenda. Positions of power and influence are cut down with sharp tongues. The police, other rappers, religions, billionaires and politicians are shown the back of a hand and occasionally the barrel of a gun.

But it’s not just pure rage, both rappers are in their late 30’s and this maturity also comes across in the lyrics with a deeper understanding of their issues with the system they are so vehemently against. They aren’t rebells without a cause trying to take it down, They are people who want to change it.

This can conflict with some of their other lyrics, they manage to blend the ridiculous the dumb and the intelligent with and attitude that says you just have to deal with it. A perfect example would be the El-p line on track lie, cheat, steal:

“I’ll tea bag a piranha tank, heart barely beatin’
A wild one who’ll swim like directly after he’s eaten
While holding a toaster oven that’s plugged with a fork in it
Cause death by electrocution’s like life in New York, isn’t it?”

In four lines we get a pompous claim and striking visual image mixed with an aggressive swagger rounded up by witty social commentary. It’s challenging, clever and offensive all at the same time and before you can digest it, the next verse is coming at you. Killer Mike also follows these lines but on occasion strips away the bravado that you hear on the majority of the album and gets down to the personal. On tracks Early and Crown we get honest and heartfelt issues covering both his past and examples of why he is angry with the police.

A main reason this challenging mix of ideas works is the interplay between Killer Mike and El-P. On a fundamental level their voices and accents complement each other perfectly And their views are both clearly defined, which can provide counterpoints within a track but also unify to pack a heavy punch.

That leads us to the production, El-p has gotten together some powerhouses of music to provide lyrics and instrumentation on the album but they never stray from his style of production. Heavy Kick drums with lots of base punctuate synths and chopped up samples heard on their previous work. But some areas have developed. The use of saxophones, trumpets and strings are mixed into the fray but the music beds never encroach on the vocals which prominently have space in the mix to run amok.

The overall flow of the album works incredibly well. At 40 minutes long all the fat has been trimmed from it. We’re left with an album that hits on all levels. Transitions between tracks can either come think and fast leaving little time to breathe or poignantly finish on something to take in before the album continues.

I can understand why the album is getting to the top of many american lists for the year. Ferguson was a turning point from anger to action, people are mad and feel that the system has gone too far. This album not only summarises those feelings it sizzles, cracks and spits them. It’s an anthem of rebellion, a soundtrack to revolution and riots. Outside of America my perspective is slightly different but this doesn’t stop the album being something special. Powerfully produced, with strong beliefs to back it up. it shows a mirror to 2014 whilst punching it in the gut and clawing its way onto my top 5 list.

Anger when directed with thought can be a powerful thing and on close your eyes El-P, Killer Mick and Zack De La Rocha prove this perfectly.

Close your eyes is a call to arms, a militant approach to there philosophy. Anger towards the corruption and lies told by people in positions of power and the methods of control used by capitalism that keep people in thier place . It may be an aggressive and bombastic attack on these issues but it’s an anger that I can relate to: