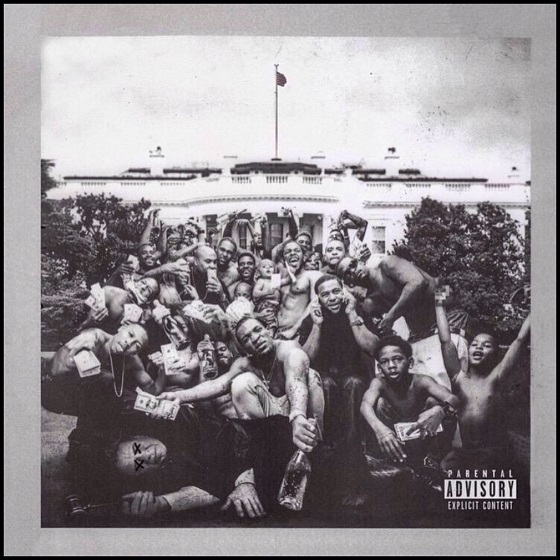 On first listen and before I even started to enjoy or get my head around To Pimp A Butterfly I knew it was going to appear somewhere on my end of year list. Now many listens later, it not only stands out as the best album this year but would easily fit on my best of all time list.

The instrumentation on this album was the first thing that stood out to me. Kendrick Lamar has managed to gather a collection of incredible musicians to create a hybrid genre that celebrates the history african american music. Soul, Funk, Jazz, Hip Hop and R&B are all fused together in a way that is unique to this album.

Although these types of genre have been used in rap previously, the majority of the time these elements were sampled to create a very structured bed for the rapper. On To Pimp A Butterfly they are living, exuberant pieces of music that weave in and out of the vocal deliveries. Complimenting and respecting each other, allowing both the time to shine within the track.

This is a sound that could only come from a collective effort between all musicians on the album. Working together within the same environment. The whole sound feels organic and requires a great deal of restraint from Kendrick. In lesser hands (especially in Rap music) big egos would stand in the way of this style of collaboration, because it requires the release of some control from the main artist over the album. It’s clear that for Kendrick the message is more important than any individual throughout the album which allows this creative freedom.

Although the lyrics are often extremely personal and deal with Kendricks battles with self-worth, fame, success, poverty, gangster lifestyle and religion they manage to provide a strong and honest look at society and how ingrained racism is within it. He achieves this by having a deep understanding of himself and others, This is clearly a man who battles with his own thoughts and feelings on a daily basis and grapples with them throughout the album. On tracks like “Blacker The Berry” they are balls of rage pointing and venomous, on tracks “Alright” and “I” they are positive and uplifting feelings of beating adversity. The album also goes into the deepest areas of depression with the track “U” which shows Kendrick as a drunken suicidal mess. All tracks push forward interesting messages with layers of depth that reveal themselves on repeat listens subverting the expectations of the listener.

Every element of each track has been carefully thought about to suit the lyrics. From the genres blended together, to the production of the track. Each of which has been curated by a wealth talent including some of the most recognisable names in the industry. These producers and featured artists are always there to contribute to the sound of the track rather than just be a name to put on the album sleeve. This powerhouse of different talent manages to work within the album due to a strong curator. The conflicting styles of producers only clash when it is the desired effect and always result in a positive outcome.

The album is structured arround a poem that develops throughout, one sentence at a time. Kendrick will recite the poem up to a point before a few tracks related to the most recent sentence play and as the album continues more is revieled untill the poems completion, just before the albums denouement. This provides a great way to centre the album around a collection of themes, the structuring of which is brilliantly managed. Tracks about his personal struggles and the weight of oppression are shrugged off with powerful positive messages of hope before doubt starts to set back in.  These feelings cycle betweeen tracks over the entirety of the album.

It’s this rollercoaster of emotions and how they are portrayed lyrically and musically that keeps the album fresh throughout its 79 minute play time. As the final track “mortal man” arrives Kendrick admits his aspirations of following the footsteps of his idols, but also brings to light that our idols are human and can make mistakes. It’s up to us as an audience to accept them as humans as well as heroes. He asks the same of us, will we be there for him? He admits his faults openly and aims to be better. It’s this one last track of catharsis that sums up the personal themes of the album before its final political end, which arrives like a great twist in a film.

Concluding the poem he recites throughout the album he then starts to interview Tupac Shakur about his beliefs and struggles under a bed of free jazz. This interview was recorded twenty years before the release of To Pimp A Butterfly and manages to portray to the listener that things haven’t changed. The issues of poverty and inequality with african americans are still as prevalent today as they were twenty years ago.  Other reviews have commented on how this album has managed to arrive at the right time, portraying post-Ferguson emotions of anger and despair. I would argue that it says far more. That the events of the past two years are only the otcome of a continous struggle that has been on breaking point for many years and the album does this in a way that’s beautify poetic.

The album concludes with another poem relating to its title which ties the politics and the personal together, once finished Kendrick asks Tupac his thoughts on the poem to which there’s no reply. The question hangs there in infinite silence, leaving the listener with the question in their own heads. A question I always contemplate for several minutes after the album has finished.

As a white man from a small town in England I am far from the culture Kendrick is talking about and yet by the end of this album I have an empathy for its people greater than I ever have before. Kendrick Lamar is an Artist in its purest form, by expressing his life and situations openly with passion and belief he has managed to create something that only great art can achieve. A connection with me as the listener that breaks down the boundaries of culture and beliefs. To humanity in its purest form, our emotions.

To Pimp a butterfly Is hugely ambitious in every aspect, A main stream album that takes risks many alternative acts wouldn’t and manages to achieve them all with such clarity and purpose it leaves me more astounded on every listen. It its a pure expression from a single artist whilst also being an incredible collaboration between musicians and producers to the highest of standards. It manages to handle both being political and personal without ever becoming self-indulgent or condescending and leaves the listener questioning their own feelings and empathizing with a man, his culture and the greater society as a whole.  It’s no contest. To Pimp A Butterfly is the album of the year.