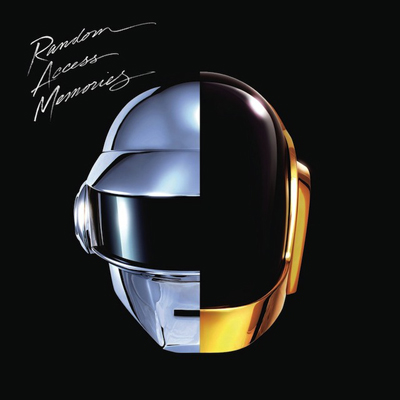 The album Discovery is a classic and will be looked on in years to come as game changer because it influenced so many up and coming indy musicians to drop guitars and pick up synthesisers. An argument could be made that it started the renaissance in synthesis which is now prevalent in all pop music.

Since discovery there was human after all which had its moments and a live album which mixed their previous work. Followed up by a long void of releases whilst they worked on the tron legacy soundtrack and random access memories.

So after an 8 year wait what have they created? Daft Punks routes are based in French House A genre you which unabashedly takes influence from other genres often seen as out dated or unfashionable but handles them with such a reverence that they become cool again. Random access memories handles Disco with this reverence. Care and attention has been put into bringing us back to a sound of the 70’s, the whole album shines with the infectious positivity and optimism that still makes the genre poplar to this day.

But it isn’t purely disco trough the eyes of modern house producers who have done a bit of film scoring (although that features). Daft Punk throw their credibility and money around and get lynchpins of the genre to collaborate on the album especially the work of Nile Rodgers who’s iconic guitar sound is prominent throughout And Georgeo Maroda who’s synth sound, voice and name are featured. Add to that many modern producers/performers who add new ideas to the mix and production that is simply sublime. Daft Punk manage to crate something that couldn’t have been achieved by any other artist. A love letter to Disco that manages to go above and beyond that, into a classic in its own right.

Touch demonstrate the scale of this achievement  and can be heard below: